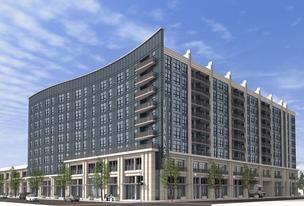 Laura Swadel, vice president with Carter, part of the master development team for the Banks, said they have the ability to put a total of 60,000 square feet of retail space in Phase IIA.

The initial 21,000 square feet of retail space will be developed along West Freedom Way, wrapping to the corners of Race and Rosa Parks streets. In addition, the developers are building out a 40,000-square-foot space along Second Street as parking for residential units at the Banks, but this space could be converted once the developers land a tenant or tenants.

“We would love one,” Swadel told me Tuesday afternoon. “A number of groups have attempted to land one in downtown. We’ll keep pursuing that, but no promises.”

Another possibility for a larger retail space would be a large drug store.

As for the portion that will be built-out ready for retailers, we can expect to see a mix of tenants similar to Phase IA, plus more service-type users since the development will have about 1,100 residents once Phase IIA is finished.

“We’re still getting a lot of interest from restaurant and entertainment types,” Swadel said.

At the earliest, Swadel expects potential tenants to sign letters of intent about a year before the development is delivered, or in the third quarter of 2014.

The retail portion of Phase IA is now 91 percent leased, while the residential portion is 100 percent leased and occupied. That portion of the project has created more than 3,600 net new permanent jobs and its construction economic impact is estimated to be $574 million.