The Banks’ master development team of Carter and The Dawson Company on Monday released plans for Phase IIA of the development, which is expected to contain 305 apartments and 21,000 square feet of retail space.

The one- and two-bedroom apartments will range in size from between 615 and 1,300 square feet.

Cincinnati City Council approved amendments to the master development agreement on Wednesday. It also approved a 15-year, $12.9 million Community Reinvestment Area tax exemption agreement for the development’s residential portion and the appropriation of up to $4 million in tax increment financing (TIF) funding – to be backed by bonds – for the City’s $2.65 million portion of a podium garage that will lift the development out of the Ohio River flood plain.

“This will continue the momentum of our city’s economic development efforts – adding jobs and making Cincinnati a more vibrant community,” Mayor Mark Mallory said in a prepared release. 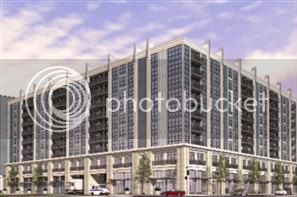 The Hamilton County Board of Commissioners will consider the matter at its August 21 meeting.

“The Banks has been a huge success thus far for the County’s economic development efforts,” said Hamilton County Commission President Chris Monzel. “This will certainly enhance the vision of a thriving riverfront.”

If approved, construction is scheduled to begin in December and to be completed in fall 2015.

The 300 apartments built during Phase 1A, Current at the Banks, are 100 percent leased. The 96,000 square feet of commercial space is 91 percent leased.