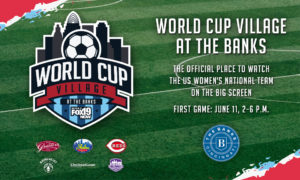 All US Women’s National Team games to be aired on big screen; First three game times and dates are set

Street to be closed for family-friendly events featuring food, drink, music and activities

Don’t miss Cincinnati’s official gathering place to watch the US Women’s National Team defend their World Cup title – all happening at The Banks.

The month-long celebration at the Banks will include street parties every time US Women play, where Freedom Way will be closed between Great American Ballpark and Walnut Street. ALL U.S. matches will be shown on the giant video screen hanging from the Reds Hall of Fame. 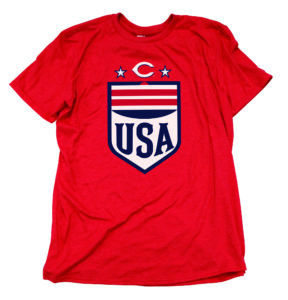 SCHEDULE: The first games and street parties are scheduled as follows:

Additional times and dates will be confirmed once the group play commences and the knockout round dates are scheduled.

The month-long celebration at the Banks will include multiple different street parties, where Freedom Way will be closed between Great American Ball Park and Walnut Street. All US Women’s National Team matches will be shown on the giant video screen hanging from the ballpark. Beer, wine and soft drink will be available for purchase along with food from all the bars and retailers at the Banks (complete list below).

In between the street parties, fans and rooting groups are encouraged to gather at the Banks host bars, who will be showing almost all the action from the Women’s World Cup and offering specials throughout the month.

Partnering once again with the event are the Cincinnati Reds. In addition to providing the video wall on the side of the Reds Hall of Fame and Museum, the Reds will also hand out a limited number of special edition Reds soccer t-shirts at the street parties with the purchase of a ticket voucher package.

The family-friendly events will feature free kids’ soccer clinics and other activities to be announced.